Become a Friend | Officers | History of the Imagination Station

The Friends of the Alexandrian Public Library was initially formed in 1977 to increase library volunteerism, expand library services, and help to construct a new library building. However, it was not until September 26th, 1988, that it was incorporated in the state of Indiana as a nonprofit corporation.

The Purpose of the Friends is to:

Become a Friend of APL

Call Stan Campbell at 812-838-3286 for information about Friends’ membership and activities.

Anyone interested in joining the Friends can do so at the library. All ages are invited! There are a number of affordable levels of membership in the Friends, with annual membership fees as follows:

The benefits of membership include email updates on programs and future book sales, a membership discount card for up to $3.00 off on copies, printing and faxes.

Officers of the Friends of APL

Current officers for the APL Friends of the Library are:

Officers are elected annually in May.

History of the Imagination Station

Over a five-day period in early October of 2000, thousands of people from all walks of life pulled together with a common purpose: to build a huge playground in Mount Vernon which was designed for–and by–the area’s children.

This was not a library project, although the Board of Trustees happily agreed to donate the land for the playground, and the Friends of APL acted as fiscal agent for the project, and formed a committee for the ongoing maintenance of the playground.

The October build was the culmination of a process that began in the Fall of 1999 when Mt. Vernon residents who had, independent of each other, contacted a playground design company in Syracuse, New York, know as Leathers and Associates, were put into contact with one another by Leathers. This group soon expanded into what became the “Core Committee” of people who decided to work with Leathers and Associates to make the playground a reality.

Children figured prominently in the playground every step of the way. In late March of 2000, Design Day was held, during which a representative from Leathers and Associates came to Mt. Vernon, gathered ideas from area children about what they wanted to have on their playground, and incorporated those ideas into an actual blueprint for the playground which was revealed at a public meeting that evening.

Kids also helped in raising funds, selling root beer floats at the local IGA supermarket, setting up penny cans in local businesses, and many other ways.

As the pictures on this page indicate, building Imagination Station was an enormous undertaking, and no one who was associated with the build will ever forget the experience. Acquaintances were made, relationships were developed, and lasting friendships were formed. Our community came together to create something of lasting value for the kids.

Yes, we built it. But—in a very real sense—it helped to build us, too.

The following rules govern use of Imagination Station by the public. 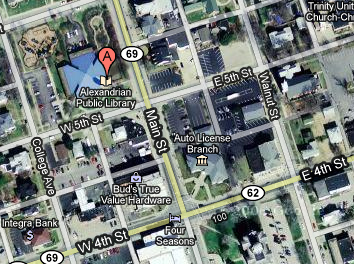 The Alexandrian Public Library serves the residents of Mount Vernon, Indiana as well as Black, Lynn, Marrs, Point and Robinson townships. Founded by Matilda Greathouse Alexander, the library has been in existence since 1895.

The Alexandrian Public Library is open 9am-8pm Monday through Thursday, 9am-5pm on Friday and Saturday, and 1pm-5pm on Sunday.